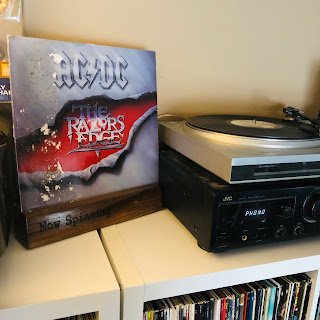 As I mentioned in a previous blog, the summer between my sixth and seventh grades was a pivotal time for my musical tastes. Before then I was listening to pop/top 40 music mostly, and I still love those same artists today. But that summer, my musical scope was broadened to include heavier things. Things I never would have thought to listen to before. I spoke earlier about how I became a Poison fan that summer, and now I will tell you how I became an even bigger AC/DC fan that summer.

It all happened on that same basketball court, with those same friends, and that same boombox. While my buddy Mark had brought along the Poison record that would make me a lifelong fan, my buddy Nate brought along an album unlike anything I had heard before; The Razors Edge by AC/DC. From the opening riff of “Thunderstruck” to the bellow of Brian Johnson’s opening lines, all I could think was “what in the world is this?” The energy was insane. The songs were heavy and hard hitting. The singer was, well I didn’t know what he was, but I liked it! Shortly after this day, I received a dubbed copy of said album on one side of the tape and a copy of Back in Black on the other side. I was transfixed on what I was hearing. What my parents called screaming, I called amazing. Read the rest of the blog here.

Just went out and picked up the new album from @bo


Error: API requests are being delayed for this account. New posts will not be retrieved.

Vinyl Gear Review: My Journey to the Fluance RT85 Turntable

In mid-December of last year, I decided that I really wanted to upgrade my turntable from the Audio